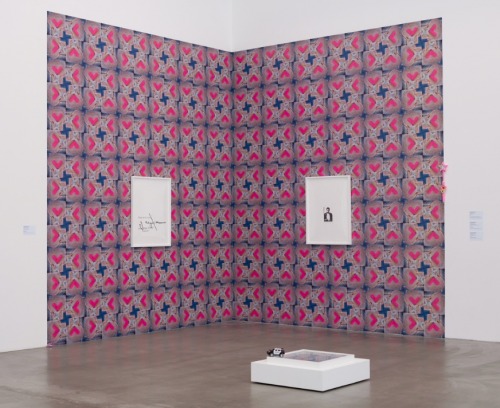 A Sordid Story of FBI Oppression Told Through Spray Paint, Glitter, and Toys

SAN DIEGO — Corners make blue crosses that don’t line up, left just slightly off kilter in 18 feet of wheat-pasted wallpaper, which is “The Livingroom” (2017) made from the FBI file of  Sadie Barnette’s father Rodney Barnette. Up closer, I see the pink arrows are placed atop photos that can be any way, upside down, sideways, or right side up. Side by side, pink and blue call up the distinctions we are taught exist between boys and girls, mobilized in Barnette’s work beneath the binding context of black radical aesthetics — something tells us not only race, but also gender, is a space that is invented. In one photo of Sadie Barnette’s little cousin, he  sits in a wicker chair, dressed in white. Close by, the words “Very Truly yours,” are blown up from a letter, framed, and slashed by a signature of the director of the COunter INTELligence PROgram (COINTELPRO) — John Edgar Hoover in “Untitled (Hoover Signature)” (2016). The signature is forged by Barnette.

A toy police car is posed just at the edge of a glittery-framed work on a plinth in “Untitled (Cop car)” (2018). Such child-like embellishments are whimsical touches that draw the viewer in, but these add-ons are only playing dress-up on much wilder realities — wild, in the sense of hounded animals. The reality was that Rodney Barnette at one point lived with Angela Davis (as a kind of body man) during her trial for murder, kidnapping, and conspiracy in August 1970. The elder Barnette was one of many relentlessly surveyed by the FBI under the COINTELPRO program. Under its auspices, The FBI surveilled political organizations deemed subversive, including members of and participants within the Black Power movement, Civil Rights movement, anti-Vietnam War organizers, and other smaller political independence movements, under the guise of maintaining national security, preventing violence, and maintaining social order. From 1969 onward, the leaders of the Black Panther Party were targeted by COINTELPRO: falsely charged with crimes, imprisoned, and killed.

About 500 pages of the Federal Bureau of Investigation’s records on Rodney Barnette exist; requests have to be made in order to access them. This limit in the materiality of the file is revamped, as Barnette crops and selects the areas that matter most. Each piece from “My Father’s FBI File, Project III” (2017), is only a tiny fraction that eclipses the sheer quantity of data, never totally accounting for the amount of time it took to acquire the files — about four years after the Freedom of Information Act filing. This time that can never be won back trails decades of discrimination, and histories of racial profiling. Another spread of black-and-white wallpaper made up of signatures and seals found in her father’s file are the backdrop for framed photographs of him that tell us about his past. In one photograph, he is in Navy uniform pre-Vietnam era. In another, his black leather jacket, turtleneck, and beret signal his role as founder of the Compton Chapter of the Black Panther party in “Untitled (Dad, 1966 and 1968)” (2016).

In this third iteration of Barnette’s well-acclaimed exhibition at the Museum of Contemporary Art San Diego, previously shown at Haverford College and the Manetti Shrem Museum, Barnette brands this overwhelmingly shameful history using the pedestrian lexicon of spray paint, glitter, and star-shaped plastic toys. Refreshingly, the work doesn’t bring bitterness, or make claims to knowledge to prove something. Instead, the work proposes changing the conditions of the world, turning the past of racial profiling into a loyal tribute to her dad. Images chosen from the electronic version of her father’s file are shown as laser prints, mounted on neon pink Plexiglass, their titles indicating what they represent — sometimes vaguely. For example, there is a lengthier excerpt in “Untitled (Rodney Barnette’s statement to Post Office about ‘suitability’ and morality)”, from “My Father’s FBI File, Project III.” Rhinestones meet around her father’s statement in the font Courier New about the results of one of many investigations. In this sheet, he is defending his living with a woman he was not married to, politely stating his belief that the choices of living arrangements between a couple is personal and moral. By showing us his words, we have a glimpse of his character, his innocence, and the invasiveness of the government’s incessant pursuits and harassment.

Barnette inserts anonymity, protecting identities by covering them with blocks of ink in “Untitled (LA BPP attempted to gain control/funeral)”, from “My Father’s FBI File, Project III.” We read about an afternoon in 1969 when three shots were fired during a BSU conference. This led to investigation by the Los Angeles Police Department which held eight people for questioning following the incident. Barnette has removed the false names, aliases and true names, and crossed out the CONFIDENTIAL stamps. These indexes show the limits of archives themselves and how names can become traps.

In Sadie Barnette: Dear 1968, … the exhibition’s titular graphite drawing stands out in the company of these digital excerpts with its sleek and steady pencil work, dense and mesmerizing, cementing the element of time. Diligently hand drawn, it operates as a sincere letter of love to her father. This exhibition demonstrates Barnette’s genuine belief in the possibility of taking one’s time to look through one’s past, diligently, to find a political orientation that does not resent this past, does not skip over it, but goes through it.

I found in the documents displayed not a fiction or a void, but a place of worship, of value. As if, that’s our only job to do: plant a family history in a local community. Rising above her family’s absurd history to reach out to visitors, Barnette comes full circle with her exhibition in San Diego, the city in which she completed her MFA. There is power in showing us the story that legal language constructs of Rodney Barnette’s life and thus, her own, but there is more power in her possession of this language, in refracting it to amplify her own voice. She stands for multiple bodies at once, her own, culled through the past of her families, and the mangled language corpse of COINTELPRO. Nothing is sealed off; the languages of our fathers and mothers are sounds to be transformed, where generational lines tie and trees cross, language takes flight through air to land back home.