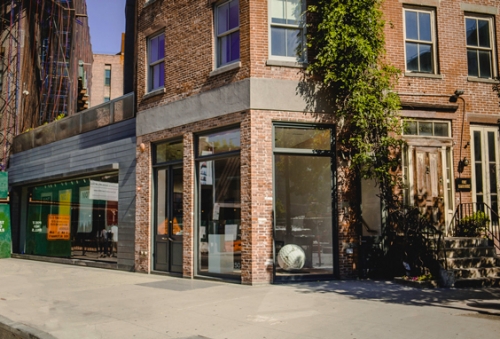 For Freedoms, the artist-led political organization founded by Hank Willis Thomas and Eric Gottesman, has opened a headquarters at Fort Gansevoort in Manhattan’s Meatpacking District. The venue will serve as a community and information center, as well as an exhibition space that will encourage broad conversation and civic engagement in the months leading up to the United States’ midterm elections, which will be held on November 6.

The site will be activated throughout the summer and fall with numerous public programs and will remain open for the duration of For Freedoms’ 50 State Initiative. Billed as the largest public art campaign in the US, the project will work with more than two hundred museums, universities, and other cultural organizations and 175 artists to stage billboards, lawn signs, town hall meetings, and special exhibitions in all fifty states, as well as in Washington, DC, and Puerto Rico. For Freedoms explained that its goal is not to push any political agenda, but to “empower everyone across the United States to feel welcome in civic conversations.”

For Freedoms will partially fund the $1.5 million initiative through fifty-two Kickstarter campaigns that aim to raise $3,000 per state, plus Washington, DC, and Puerto Rico. The organization has already raised more than $120,000 and has successfully completed its campaigns for twenty-three states. Among the states that are still working toward their fundraising goals are Alaska, Colorado, Illinois, Montana, and Virginia.

Inaugurating the group’s headquarters is a two-month-long solo exhibition featuring the work of artist Paula Crown. Titled “I am FOR,” the show, which explores themes of environmental activism, racial taxonomy, and political factionalism, opened on June 28.