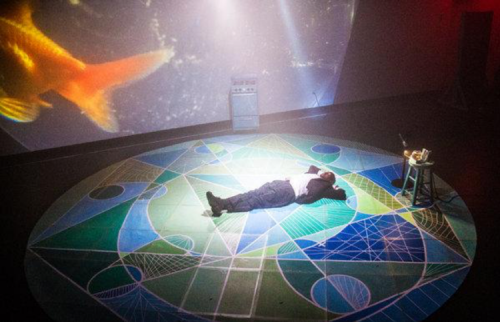 The avant-garde is not usually associated with star turns, but it has often relied on them — Kate Valk’s performances in Wooster Group productions immediately come to mind, or Scott Shepherd’s in “Gatz,”Elevator Repair Service’s adaptation of “The Great Gatsby.”

What Cornell Alston does in “Jack &” is not as technically polished, but the charismatic Mr. Alston easily holds the stage in this piece by the experimental theatermaker Kaneza Schaal (“Go Forth”). He also brings a life story that adds a poignant depth to the production; whenever the show runs the risk of being too cerebrally, frustratingly abstract, Mr. Alston grounds it.

The first section of the tripartite “Jack &” — which had a short run at the Brooklyn Academy of Music in October and is now playing at New York Live Arts — is “The Monologues,” which begins with Mr. Alston’s Jack recalling conversations in a prison’s community room. The inmates are heatedly discussing the killing of Osama bin Laden. “Against my mother’s good advice never to argue with fools, I thought it important to add something to this debate,” our narrator says before jumping into the fray.

Mr. Alston relays these exchanges with a very funny mix of exasperation and a certain tenderness for the men. The line between theater and reality is blurred because he himself was incarcerated for 33 years — Ms. Schaal first saw Mr. Alston acting in “Ma Rainey’s Black Bottom” at the Fishkill Correctional Facility.

But the show is not a docudrama and it has more on its mind than one-liners about Navy SEAL canine units.

As a poor goldfish swims about a small container onstage — sometimes calmly, other times in an unsettlingly frantic manner — Jack turns to a discussion of baking, perhaps as a method for order, a way to help with re-entry into the world after leaving his own fish bowl. (Mr. Alston works nights in an industrial bakery.)

Jack is now paired with Jill (Stacey Karen Robinson), and he has a goofy friend (Modesto Jimenez, a.k.a. Flako) who is also called Jack. The universe is that of 1950s and ’60s television comedies and comes complete with a laugh track and canned applause. In addition to designing the show, the artist and writer Christopher Myerscontributed the text to the first segment, and wrote the second with the Pulitzer Prize-winning playwright Jackie Sibblies Drury. (Ms. Schaal, an accomplished performer in her own right, appeared in Ms. Drury’s “Really” three years ago.)

Despite being grounded in a heightened comic style, this second section has a surreal vibe that gets even more pronounced as we glide into the wordless third one, “The Cotillion.” Mr. Alston and Ms. Robinson, now in formal wear, perform a succession of dance moves while Mr. Jimenez accompanies them dressed in the style of John Canoe, an African tradition that has endured in the Caribbean.

Admittedly the play — which is paired with an installation by Mr. Myers, also called “The Cotillion,” featuring paintings and videos of the show’s inspirations — can be elliptical, and I am not sure I would have been able to parse Ms. Schaal’s intent without the program notes. “Jack &” ends with the audience invited on stage for a slice of cake. By then maybe we are joining Jack — and by extension Mr. Alston — in the title, following the ampersand to help form a new community. It is a lovely, hopeful thought.

Jack & With the Cotillion

When you purchase a ticket for an independently reviewed play or musical through our site, we earn an affiliate commission.