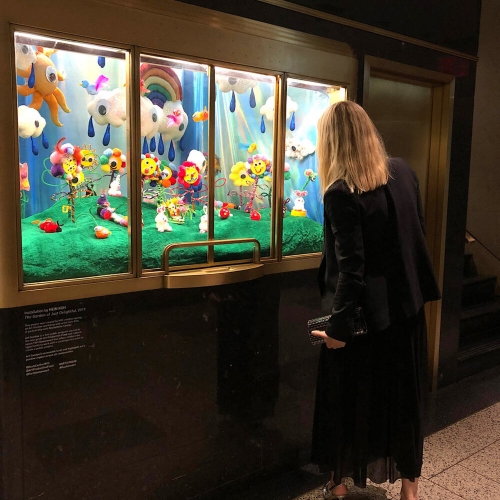 Plus, Fremont talks about the projects she’s working on this season, and what exhibitions she’s most excited to see.

With so many gallery and exhibition openings this month, the fall art calendar can feel a little overwhelming. But there’s also great art to see while you’re out and about in public spaces that don’t require ticketing.

Casey Fremont, executive director of the Art Production Fund, a non-profit arts organization that presents large-scale, cutting-edge contemporary works around the world, should know. Fremont—who is responsible for selecting artists and commissioning new works—has been with APF 15 years, where she has overseen projects such as Ugo Rondinone’s Seven Magic Mountains in Las Vegas and Elmgreen and Dragset’s Prada Marfa in Texas.

artnet News caught up with Fremont to discuss the projects she’s working on this season, her can’t-miss list of fall exhibitions, and her thoughts on the role social media plays in the promotion of art.

How did you come to work for the Art Production Fund?

I started out as an intern when I was 16 years old, in high school—so 20 years ago, which is insane. I interned there for two summers, and then I graduated college and started working for [founders] Doreen Remen and Yvonne Force Villareal. It was just the three of us for many years; I joined in 2004, only four years after APF’s founding. And then in 2016, Doreen and Yvonne stepped away from the day-to-day operations, and I took over the leadership role. So, including my internship years, I’ve been with the organization since it sort of began, which is amazing and quite rare in the art world.

What do you enjoy most about working for a non-profit public art organization?

I think what’s obviously the most rewarding thing about presenting art in the public realm is that you get feedback from everyone. So, it’s always interesting when you launch a project and you think it may be received one way, but it impacts people in ways you hadn’t really considered. It’s exciting and it’s always different given that we generally program in spaces where we haven’t worked before. That can be challenging, but once we make it work, it’s always satisfying, at the end of the day.

Did you ever consider making a switch to work for a museum or private gallery?

The only other “job” I’ve had was interning at Kasmin Gallery, when I was in college. I enjoyed being in the gallery setting, but working at APF was still my absolute dream job. Even 15 years later, every project is ultimately a new experience, and brings new challenges along with it. It’s never boring, and there’s nothing more satisfying than making art accessible to people from all walks of life, and giving artists the opportunity to realize an installation in a public forum.

What was the first major public project that you worked on?

Prada Marfa in 2005. We dealt with so many challenges—from fundraising to fabrication and vandalism, after the opening. There was an immediate, overwhelming response to it—even without social media back then—and it was clear a very important artwork had just been realized.

Why do you think Prada Marfa became such a lightning rod?

A Prada store set in the desert is surreal and intriguing, as well as photogenic. It was perfect for Instagram before Instagram existed! Although the goods have never changed from the fall 2005 collection, the concepts of desire and consumerism—especially with luxury brands—continue to be as relevant and polarizing as they were 14 years ago.

I’d imagine the rise of social media has contributed significantly to the reach of public artworks, Prada Marfa being one example. It’s maintained its “destination” status and relevance years later, largely, I would say, because of Instagram’s lifeline. How do you feel about social media’s role in the promotion of public art?

I think social media has dramatically changed how people experience art and how they find out about art. Ultimately, it’s a good thing because it encourages people to get up and go check things out for themselves. Something like Prada Marfa is an example of a project that began before widespread social media use, and then once people started seeing posts about it, it became a destination in a way that it wouldn’t have otherwise. That’s true.

What we never want for any of our projects, though, is that someone would choose not to go and see an artwork in person because they feel they’ve experienced it adequately enough through their screens. There’s nothing that can take away from that actual, physical experience of being in the presence of an artwork—there’s nothing that can replace the experience of standing in the desert in front of Seven Magic Mountains, or taking the drive from El Paso down to Prada Marfa. I think the in-person factor continues to be the most important part of art appreciation, and it can’t be replicated online.

Tell me about the public art projects you’re working on this season.

In October, we’re going to be working with Lucy Sparrow, a British artist. She’s created felt bodegas and textile-based works in different cities, and will be doing something similar for us this fall. It’s part of our ongoing partnership with Rockefeller Center. We’re taking over an empty storefront there, and she’s creating a high-end, Eataly-esque felt store. A New York “upscale deli” is what she’s calling it, and it’ll be a totally immersive installation where people can come and experience it, and, if they want, they can shop, too.

She’ll not only interact with visitors at the storefront, but she’ll also take over the spaces where we’ve been doing our ongoing programming throughout the concourse and lobbies in and around Rockefeller Center. It’ll be a total Lucy Sparrow takeover which is really exciting and something we haven’t done before. It opens on October 1.

Then in LA, we’re doing a project with Mika Tajima. Mika is a multidisciplinary artist whose work incorporates video and digital media. The project will be presented on the digital billboards of Sunset Boulevard in West Hollywood. We’re partnering with the city’s public art division to present this new, site-specific video work that we’ve commissioned called PSYCHO GRAPHICS; the name refers to the ambient technological infrastructure that controls and shapes our lives. The work features Mika’s collaboration with the ballet dancer Alexandra Jacob. The idea is that she’s responding to politics, intelligence, military, and marketing—all structures and tools that we have and use in the world that create a tension between freedom and control.

Jacob is going to use her body in sort of bondage-esque, alien ways to act out [the influence] of technology in our lives. It’s obviously very relevant. I think it’ll be especially impactful in LA, on Sunset Boulevard, where people don’t really stop to see artwork. It’s a cool, unexpected venue. It’ll play for one minute—which is actually quite long for a video in a public space—every ten minutes within the hour, in two locations. That will also debut in October.

I’m also excited about our fall editions of Art Sundae, which is a series that we’ve developed over the last couple of years in partnership with Fort Gansevoort, a gallery in New York. We bring in an artist to work with a group of kids for a one-day workshop, and together they create a public art project. It’s a public program, everyone can sign up and go. It’s about highlighting the importance of art and expression and giving kids the opportunity to display their work in the public.  They feel that pride of having created something that exists for the world to see and having people appreciate it. It’s merging the idea of kids working with art and our mission statement of bringing art to the public and promoting public art in general.

Art Sundae will kick off for the season this weekend with Christopher Myers, who’s this amazing artist and illustrator. He’s going to have kids tracing their bodies and creating a kind of re-imagined map that weaves their stories together. It’ll live on Rockefeller Plaza, in chalk, and eventually it’ll wash away.

What other art exhibitions or projects are you looking forward to seeing this season?

Definitely Wangechi Mutu’s The NewOnes, will free us, the installation of  four bronze sculptures in the niches of the facade of the Met. I think it’s brilliant to showcase contemporary art in these historically empty public spaces.

Then there’s Shirin Neshat at The Broad. Her exhibition will feature monumental photographs and immersive video, including the debut of a new video work. This will be the largest exhibition—and first major exhibition—of Neshat’s incredible work in the Western United States.